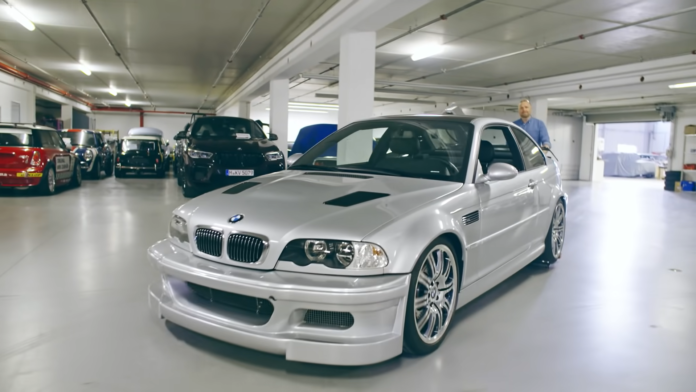 Twenty years ago, BMW built a special car. They wanted to win in american endurance racing, so they converted the iconic E46 M3 in a racing machine. The result was the BMW M3 GTR, with whom the bavarian manufacturer dominated the 2001 American Le Mans Series, in the GT category. Its road-going version si a unicorn in the automotive world: it was built in limited numbers, but nobody knows exactly how many units were actually assembled (the marque stated they built 10 units, including three prototypes). Let’s take a look at this 20 year old beauty.

Based on the E46 M3, the GTR presents many differences from the standard car. The chassis is the same, with minor tweaks to host a different engine-transmission combination. A bigger and sportier bumper dominates the front end, with larger air vents to improve engine cooling. The sideskirts are identical to the racecar, while at the back of the car we find a big spoiler. Under the hood, the standard 3.2 liter inline six cylinder is replaced by a 4 liter naturally aspirated V8. Equipped with a dry sump system, the unit deliveres 350 horsepower in road trim. The performance datum could look a bit disappointing (the six cylinder provides 343 HP, only 7 less than the V8), but there’s a reason for that. The road engine had to pass emission standars, so BMW engineers had to detune it to comply with them. In racing trim, the engine delivered 450 HP.

A six speed manual is the only transmission avaliable for the GTR. The interior features a couple of sport seats, made with leather and alcantara. BMW removed some items to reduce weight: the AC system is gone, the audio system and the rear seats are removed too. The GTR weighs 1350 Kilos, 38 less than the lightest E46 M3 ever made, the CSL. The GRT can reach a top speed of 156 mph, electronically limited. There was an option to remove the limiter, increasing its top speed to 174 mph. The GTR was never sold to the general public, and most of its units are impossibile to find. It’s current value is priceless.

The GTR in its racing trim was developed by BMW Motorsports in six months only. They fielded four cars in the first race of the American Le Mans Series season, the 12 hours of Sebring, for the factory team and for their partners during that time, PTG Racing. In 10 races, the M3s achieved seven wins, and the GT Class manufacturers championship. Their entry was questioned by rival manufacturers like Porsche, who accused the bavarians to ave joined a production based category with a prototype machine. Many high leveled drivers drove the GTR in the ALMS, including former F1 racers Hans Joachim Stuck, JJ Lehto and Karl Wendlinger. Former NASCAR driver Boris Said also drove the car, as a member of the PTG satellite squad. The GTR also won the 24 hours of Nurburgring two times, in 2004 and 2005.

Read our latest news about BMW