Real European designers who raise knowledge about European design. This is the aim of the episodes broadcast via Facebook, part of a series of video called “5 minuti con un EUROPROGETTISTA” (5 minutes with a European designer). The videos have been launched by the website “Courses of European Design”.

European design: what is a Youth Worker?

Corsi di Europrogettazione, a website where you can find masters in European Design for youth mobility and tertiary sector, has decided to launch “5 minuti con un EUROPROGETTISTA” (5 minutes with a European Designer). It is a series of via-Facebook video, whose aim is to raise knowledge of what European design consists of. Furthermore, it answers all the questions about this part of the tertiary sector.

During the seventh episode they broadcast, the public can watch and listen to the interview of Milena Anzani, European designer to the JOINT Association. She and the interviewer have pointed out the figure of the Youth Worker. A Youth Worker is a professional who works with young people and makes easier the personal and social development of the youngers. In the video, the interlocutors give the public the possibility to deepen the topic of who a Youth Worker really is, as well as to apprehend in which specific context they work. It is also possible to understand how these professionals can involve young people in non-formal activities and figure out how to become a Youth Worker.

You can also read: Travelway, a social trip to support tourism in Italy 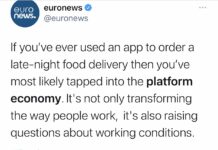 Entrepreneurship guidance by the successful businessman