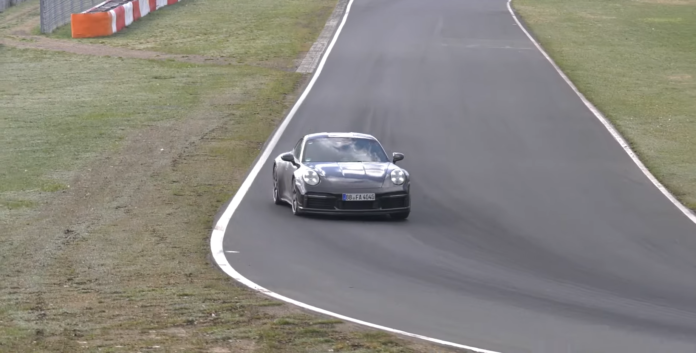 It’s been 10 years since the last Porsche 911 Sport Classic came out. But now, that special 911 could be back. Some observers spotted a 992 prototype with peculiar features of what could be a new, special version of the current sports coupe. The german manufacturer did not release any teaser of a new model, but it looks like something special is coming. The prototype captured in many pictures had minimal camouflage, which means we are pretty close to its production form. Let’s take a look at what we know about this new, exciting sports coupe.

Porsche 911 Sport Classic: what we know about?

If you have a look at the pictures (like this above), you’ll notice the roof has a couple of creases, which are also visible on the front hood. These creases recall the so called “bubbles”, a device installed on older racecars to make the cockpit more comfortable for drivers who wear helmets. The car features Sport Design 19″ (or 20″) alloy wheels, with a sportier look. At the rear, a ducktail-shaped rear spoiler is detected, which recalls the most famous special edition 911 ever, the Carrera RS 2.7. The front and the rear bumpers are the same as the Turbo S.

Talking about the powertrain, we still don’t know the full technical specifications of the Sport Classic. According to the news website Autoblog, it should be powered by a slightly-tuned version of the 3 liter twin turbo boxer six of the standard 992. We also expect a six-speed manual transmission, or a double clutch PKD unit (or both). Performance numbers are still unknown. Porsche did not unveiled its launch date yet, but the minimal camouflage of the prototype suggest that moment is not too far away. The final model will most likely be presented by end of the year.